Use & Maintenance of microelectrode holders 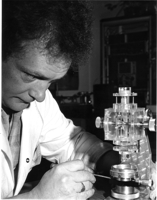 G23 Instruments was formed in 1996 at the Department of Pharmacology, University College London by Dave Osborne (pictured left), our Senior Engineering Officer, to provide scientists with equipment and expertise. When Dave retired from UCL the running of the company was taken over by Dr Bob Muid.

The Pharmacology Department at UCL had long been associated with advanced research in the fields of electrophysiology, receptors, ion channels, neuropharmacology and immunopharmacology. It was the only Department in the UK to have been rated in the top category in all five UGC/HEFCE Research Assessment Exercises up to 2001, and was the top-ranked (5 star A) Department in the latter two exercises in 1996 and 2001. This grading is based on the research activities of all members of the staff and the expertise which had been developed to support the "leading edge" research workers is now available to other parties through G23 Instruments.

During the reorganisation of the Faculty of Life Sciences in 2008, the Deparment of Pharmacology was disestablished and its members became part of the new Research Department of Neuroscience, Physiology & Pharmacology.

Dave Osborne still designs our items and machines our custom made holders. When Bob Muid retired from UCL in 2010, G23 Instruments became an independent company.

History of the Pharmacology Department at University College London

With the founding of the Institute of Medical Sciences in 1905, the Department of Pharmacology was established- the first such department in England, housed at that time in a single room - with A.R.Cushny, FRS (image 1, below) as its first Professor. Cushny was very interested in optical isomerisation and he reported on an early clinical trial using hyoscine isomers which was later analysed by Student in his now seminal work, ‘the probable error of the mean’. Cushny was succeeded in 1919 by A.J.Clark, FRS, (image 2) the first pharmacologist who inculcated a quantitative aspect into pharmacology by studying in detail and describing the principles of the relationship between the concentration of a drug and its effect at a receptor. While at UCL (in 1923), Clark wrote his textbook on "Applied Pharmacology" – subsequently updated many times by others in the department and still extant in the form of the standard textbook "Rang & Dale's Pharmacology" by Rang, Dale, Ritter, Flower and Henderson, which itself is in its 7th edition. Clark placed great emphasis on the quantitative description of data, an emphasis which we still take very seriously at UCL Pharmacology to this day, indeed, a quote from Clark’s book on ‘The mode of action of drugs on cells’, published in 1933, has clear present-day resonance:

…”In the first place, there is no advantage in fitting curves by a formula unless this expresses some possible physico-chemical process, and it is undesirable to employ formulae that imply impossibilities. It is a question of finding a few systems so simple that it is possible to establish with reasonable probability the relation between the quantity of drug and the action produced”…..

To continue our journey through time, Clark 's successor, E.B.Verney, FRS (1926-34, image 3), was noted for his work on the kidney, leading to the discovery of antidiuretic hormone or vasopressin. Verney was succeeded by John H.Gaddum, FRS (1935-38; later knighted, image 4). Gaddum was also an enthusiastic advocate of quantitative methods and formulated the very first principles of competitive antagonism; he once wrote the following truism (echoing the view of Lord Kelvin) again relevant to the present day:

…"A branch of science comes of age when it becomes quantitative"…

Subsequent holders of the UCL Chair in Pharmacology were Frank R. Winton (1938-61, image 5), another renal physiologist serving one of the longer terms of office, and Heinz O. Schild, FRS (1961-1973, image 6). Schild’s contribution was notable in providing an additional legacy for quantitative pharmacology by developing methods for measuring and assessing drug antagonism, culminating in the widely used pA2 measurement and the 'Schild plot', for determining the affinity of an antagonist for a receptor. In addition, he was also an authority on histamine and allergic reactions.

James W. Black FRS was next in line (1973-78, image 7) – eventually knighted – who received the Nobel Prize for his seminal discoveries of β-blockers and histamine H2 receptor antagonists, both of which have become major therapeutic classes of drugs. In more recent times, the receptor-ion channel core interest of the Department came to the fore under the leadership of Humphrey P. Rang FRS (1979-1983, image 8) and Donald H. Jenkinson (1983-1987, image 9), both of whom had distinguished careers.

David A. Brown FRS (1987-2002, image 10) who discovered the acetylcholine (muscarinic)-sensitive potassium channel (M channel) became Head and led the Department during one of its most formative eras. During the last 25 years it became clear that advances in technology, particularly electrophysiology and molecular biology, enabled more and more incisive experimental design enabling the properties of single receptors and ion channels and the actions of drugs on these to be discovered.

The Department maintained a very strong research record. It was the only Department of Pharmacology in the UK to have consistently achieved the highest rating in all of the five research assessment exercises. This emanated from a sustained period of significant grant income from research councils and scientific charities, many in the form of longer-term programme grants. The core of the Department’s research was focused around the role and function of receptors and ion channels in neuroscience. Principally, this involved the study of receptor/channel mechanisms, their modulation both in vitro and in vivo, and their involvement in synaptic transmission and signal transduction pathways.

After the Department of Pharmacology was disestablished in 2008 along with the other departments in the Faculty of Medical Sciences, Trevor Smart became head of the new research department of Neuroscience, Physiology and Pharmacology in the Division of Biosciences at UCL.

Copyright © 1996-2022 G23 Instruments. All rights reserved. G23 Intruments' products are designed and manufactured in the UK.
Other products and companies referred to herein are trademarks or registered trademarks of their respective companies or mark holders. Information in this document is subject to change without notice.